Big flow data with the 3i consortium: an interview with Dr Adam Laing

Dr. Adam Laing, PhD joined Professor Hayday’s King’s College London laboratory in 2013 in order to develop the protocols and experiments for the 3i project. Recognised as ambitious and ground-breaking, to date the 3i project has accomplished the immunological phenotyping of 500 knockout mouse lines for the purposes of creating a valuable data set which may be used by the entire scientific community.

So, we were delighted when Dr. Laing took time out of his busy schedule to talk to us about his work.

Can you tell us what exactly is the 3i project?

The Infection and Immunity Immunophenotyping (3i) consortium is a UK-based research effort funded by the Wellcome Trust and led by the King’s College London, under the auspices of Professor Hayday. The group comprises teams from King’s College London, Imperial College, Albert Einstein College of Medicine and the Universities of Cambridge, Oxford and Manchester. The aim is to perform high-throughput broad and in-depth immunological phenotyping of the knockout mouse library that have been generated by the Wellcome Trust Sanger Institute in Cambridge with the aim of identifying novel genetic regulators of the immune system.

How did this project come about? What was the inspiration?

Previously the Sanger Institute team was conducting broad phenotyping of the knockout strains, examining characteristics such as metabolism, development fertility etc. and an immune subset analysis of blood. Through this work it became clear that they were scoring a lot of hits in the Immune System, and in fact these where over represented relative to the level of analysis that was being applied at the time. This provided grounds to apply to the Wellcome Trust to establish an enhanced immunology programme with the aim of performing broad and deep immunological phenotyping on the knockout mice: both steady state (genes that regulate the development of the Immune System) and the ability of the Immune System to respond to various challenges. It’s important to bear in mind that all of this is in parallel with the existing non-immune phenotyping program already established at then Sanger – We already knew that the Immune System was highly relevant to other aspects of biology, such as metabolism and the nervous system. This project affords greater insight into these intricate dynamics.

What is the role of your team in King’s College London?

At King’s College we run a high resolution flow cytometry immunophenptyping analysis on immune cells derived from spleen, bone marrow and mesenteric lymph nodes, helping us to identify the genes that regulate the Immune system at steady state. In parallel the functional immune response from the same ko mouse lines is assessed by challenging the immune system with chemical stressors and infections such as Salmonella, Influenza, Trichuris and DSS. Working like this means we can relate, on a gene by gene basis, the immune phenotype at steady state to immune function.

The logistics must have been challenging. How do you standardise the project?

Yes, it was challenging. We had to do a lot of optimization and standardization work, including developing protocols that consistently yield the best single cell isolations from the various tissues in a high throughput setting, and of course there was the extensive panel and instrument optimisation. Then post acquisition, in collaboration with Ryan Brinkman’s group in Vancouver, we developed a fully automated analysis pipeline -this has further standardised our data output by minimising operator variation in analysis, and, of course cutting down on the time required to analyse such a large data set.

This is clearly important work. Why did you have to wait to 2013 to get it started?

A number of reasons, first the opportunity needed to be available to run a project like this and that was provided by the Sanger institute with the logistical and technical expertise needed to produce ko lines at the scale. Then in terms of running analyses at this level of detail, simply the technology was not available before then. When we set the project up, we knew we were running at the cutting edge of experimental progress, we knew that the project would have a run for 5 years, and we had to make sure that the data at the start would be comparable to the data at the end. So we had to set up futuristic and robust analyses that would see us through the lifespan of the program. We chose the BD LSRFortessa X20TM as it was the high-end offering from BD at the time, which was able to accommodate both our detailed, high-resolution analysis and also the high sample throughput that we needed.

So BD was important to your work?

Yes. We used four lasers (everything but UV*) in the LSRFortessaTM and employed BD Brilliant TM violet reagents, which made our work so much easier. On top of that, BD provided fantastic support with the panel optimization, which was just as well, as all together we had 6×12 colour panels!

Thank you for your time Adam. We are so impressed with the work that you have done and are proud to have played a part. We hope that our new instruments and reagents will continue to have an important role in your certainly bright future.

To find out more about 3i and to browse the data, go to http://www.immunophenotype.org/.

Most popular Most recent 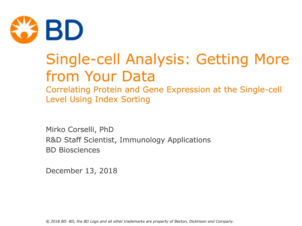